Thank you Mr President, I rise today to recognise the importance of Remembrance Day.

I stand here, proud to be an Australian and grateful to live in our prosperous nation. I, like so many others, am forever thankful to those brave Australians who have fought in conflicts to defend our nation, culture, and democracy. Mr President, the prosperity that this generation of Australians enjoys has not always been afforded to those Australians who have been before us. Over 100 years have now passed since the guns fell silent on the Western Front to signal the end of World War 1. In 1918 after four years of continuous warfare, on the 11th hour of the 11th day of the 11th month, German leaders signed an Armistice, concluding the Great War. In 1993 on the 75th anniversary of the armistice, Remembrance Day again became a focus of national recognition and has since been commemorated annually by services hosted across the nation.

I have spoken in this chamber before about the terrible toll inflicted on our nation as a result of the Great War. At the time of the conflict, Australia’s population totalled fewer than 5 million people, with over 416,000 Australians enlisted to fight. Tragically 60,000 were killed and 156,000 wounded, gassed, or taken prisoner. Not included in these harrowing numbers are the countless soldiers left to grapple with invisible scars caused by the torment of battle. The loss of life and injuries suffered by our nation throughout the war was the greatest per-capita suffered by any allied nation, devastating communities, and families. In the subsequent years after the war, Australia endured high inflation which resulted in a severe recession into the 1920’s. The repercussions of the war were far-reaching in Australia and lingered in our communities for many challenging years.

We think of Australian soldiers fighting against the scourge of fascism in World War 2. The tragedies in Europe and North Africa and the triumphs in the Pacific region. The devastation felt not only abroad, but at home in Darwin and Sydney Harbour. Ultimately, our nation’s resistance against attempts to breach our shorelines.

We think of the Australian Soldiers who fought in the Korean War a short five years after the conclusion of World War 2. The 340 Australian soldiers killed in the struggle between communism and democracy which still cripples the Korean peninsula today.

We think of the Australian soldiers who served in the Vietnam War. The unwavering sacrifices these servicemen and women made to our nation despite the challenges that each soldier faced.

We think of the sacrifices made by Australian servicemen and women this century in Iraq and Afghanistan.

Remembrance Day is a symbol of our nation’s efforts in the face of adversity and an important opportunity for us to pay our respects to the men and women who have served our nation and paid the ultimate sacrifice in each conflict throughout history so we can enjoy the freedom, our democracy, and our culture, that many of us take for granted today.

Mr President, today I attended the Remembrance Day service at the Morphett Vale RSL. It was a moving service and I was honoured to lay a wreath on behalf of the Liberal Party. Despite the health challenges that our community faces today, it remains paramount that we continue to pay our respects on occasions such as Remembrance Day. It is our responsibility today to communicate the values of our nation that have been tested in each conflict, national unity, culture, and democracy. I invite everyone to reflect on our history today and pay our respect to those who have served. As Winston Churchill said to the House of Commons in a 1948 speech – “Those who fail to learn from history are condemned to repeat it.”

Mr President, Mr Charles Bean, the official war correspondent who was instrumental in establishing the Australian War Memorial in Canberra, witnessed 23,000 Australian casualties during six weeks in Pozieres, France. Mr Bean noted that one of the dying Australian soldiers asked him, “will they remember me in Australia?”. I stand here today Mr President with all Australians and say, “we will remember them”. 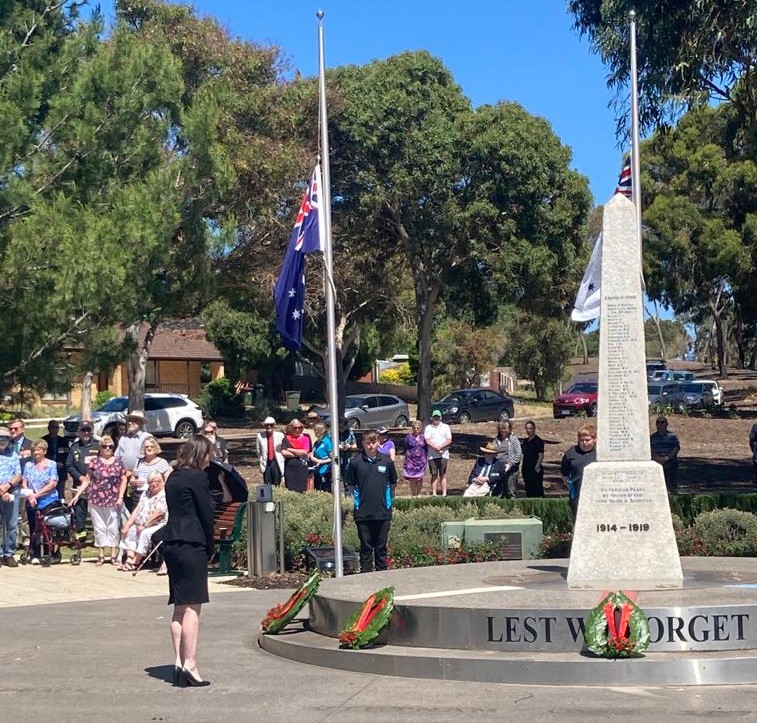